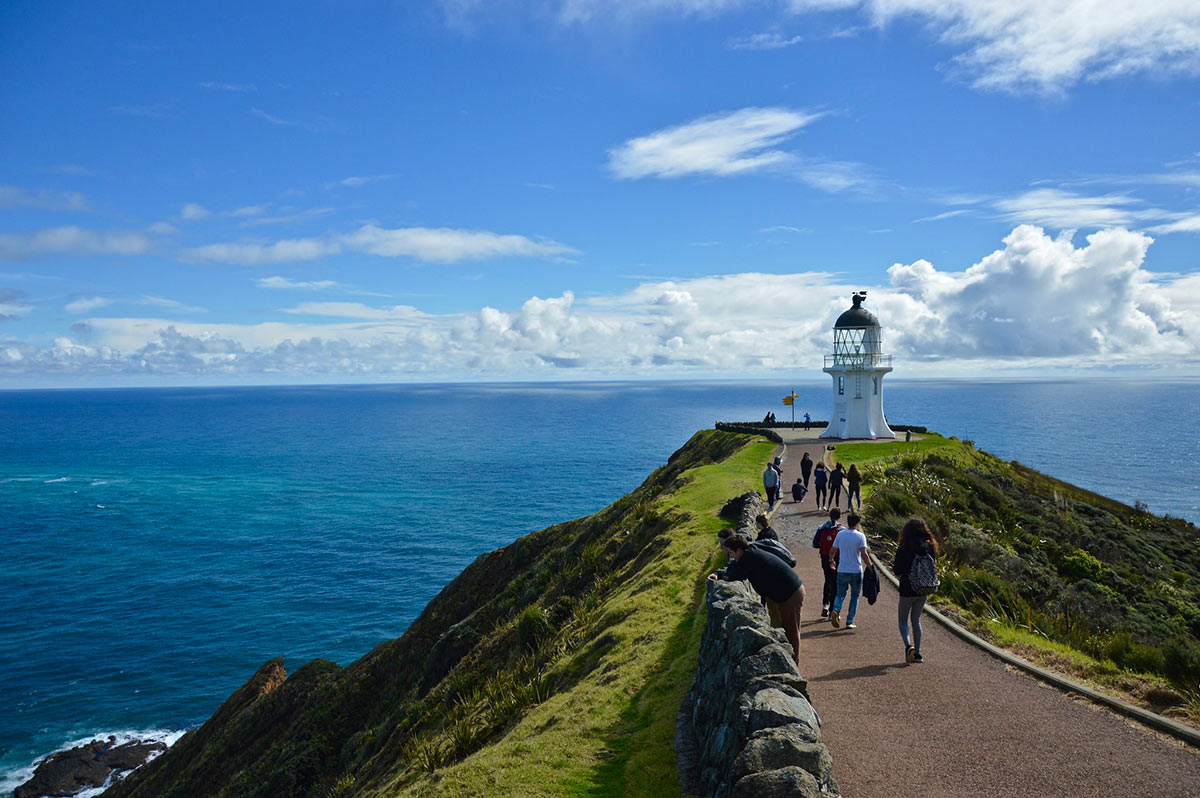 At the Cape, the Tasman Sea meets the Pacific Ocean in a spectacular swirl of currents. At the northernmost tip of the Cape is a gnarled pohutukawa tree, believed to be over 800 years old. According to Maori oral history, the spirits of deceased Maori leap from this tree into the ocean to return to their ancestral homeland of Hawaiki.

While it’s not quite the most northern point of New Zealand (North Cape is further north, but it’s a scientific reserve and not open to the public), Cape Reinga is definitely the end of the road.

From Kaitaia, the drive to Cape Reinga takes about 1.5 hours each way. Guided coach tours depart from Kaitaia daily. As well as taking you up to the Cape, these trips travel along popular 90 Mile Beach, bringing Maori and early European history to life on the way.

Being a sacred site, eating is not permitted at Cape Reinga. However if you’re looking for a good picnic spot, take the turn off to beautiful Tapotupotu Bay, 5km before the Cape.

Things to do:
Sightseeing
Walking 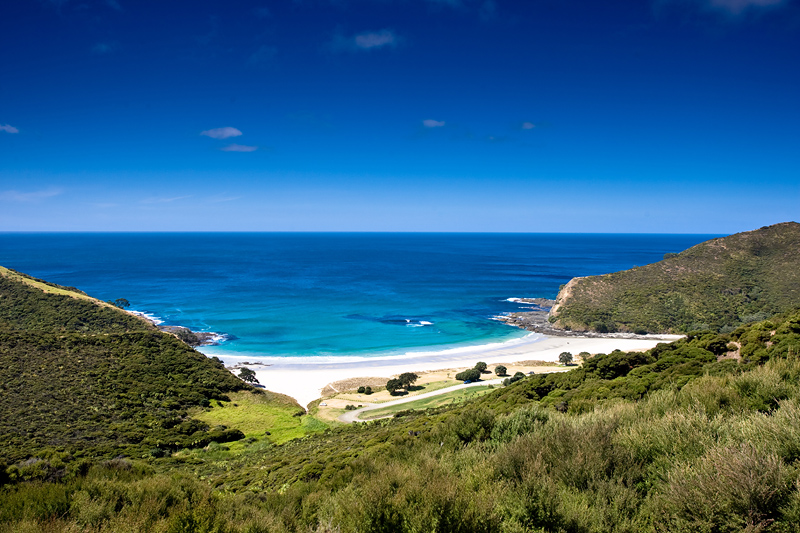 This is a scenic beach with a nearby lagoon suitable for swimming and kayaking. Visit Cape Reinga/Te Rerenga Wairua only 5 minutes drive away or 3 hours via the walking track. Stay at New Zealand’s most northern campsite and experience the scenic wonders of Tapotupotu, from lush forest to breaking surf and breath-taking views. Camp with the beach at your doorstep, and awaken to the sweet sound of white water breaking on the sand. Tapotupotu is the perfect place to relax, enjoy and explore the great Far North. 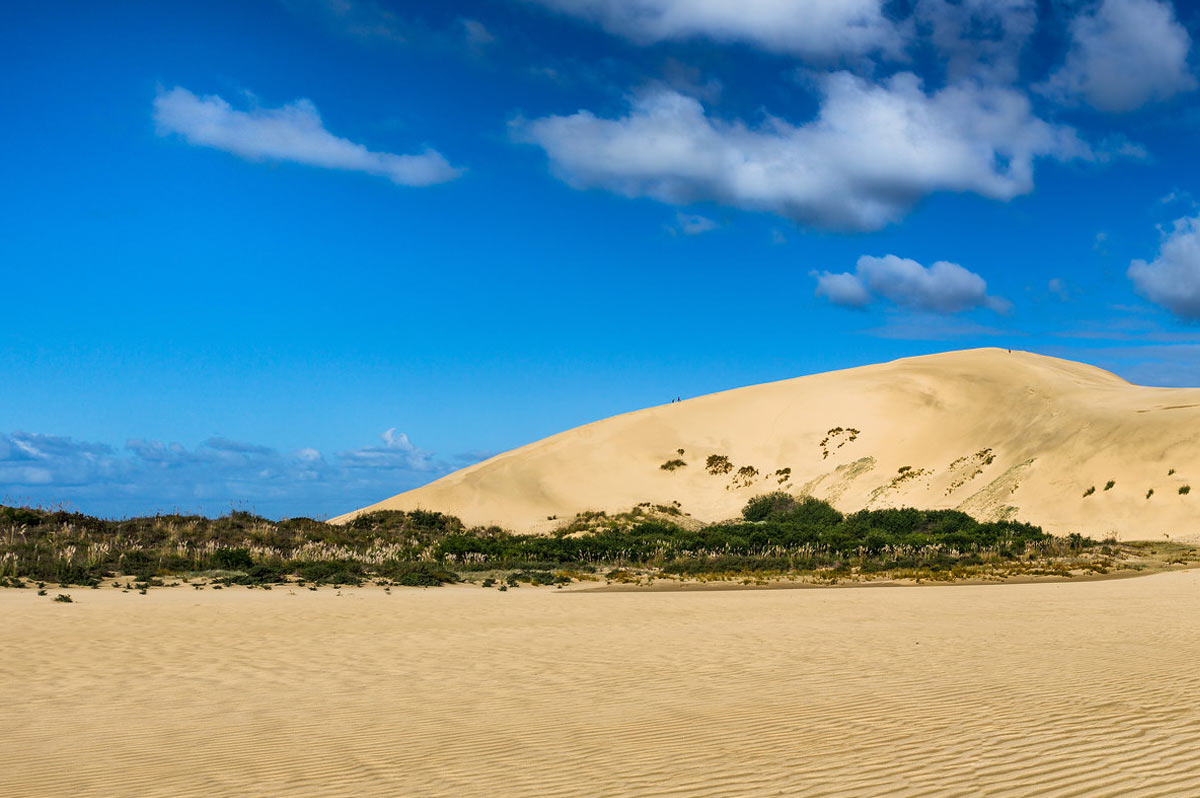 There are 7 sq km of giant sand dunes on either side of the mouth of Te Paki Stream. For those wishing to clamber up and toboggan back down, you can rent sandboards from local outfits signposted en route or from a caravan at the car park (during summer only). A large chunk of the land around Cape Reinga is part of the Te Paki Recreation Reserves managed by DOC. It’s public land with free access; leave the gates as you found them and don’t disturb the animals. 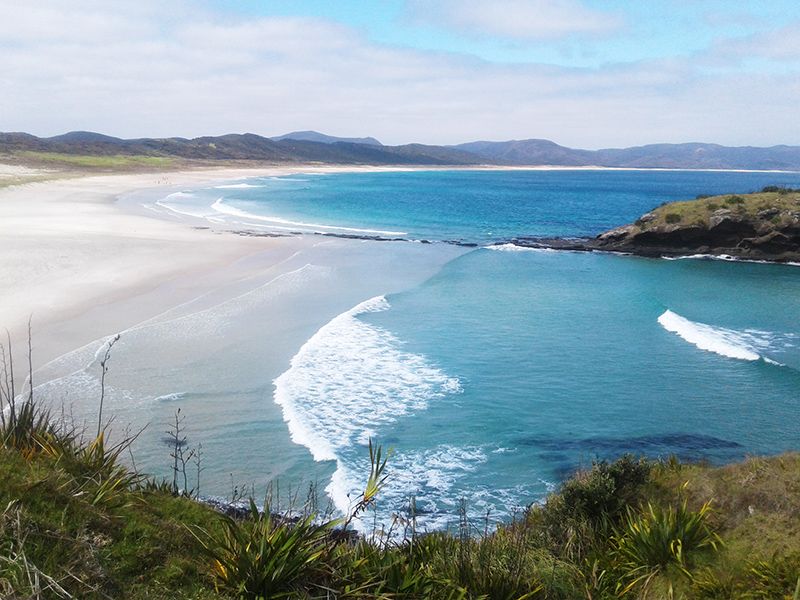 Kapowairua (Spirits Bay) is a place to relax, enjoy and explore the great outdoors. There is a scenic DOC campsite nearby to stay at, with lush forests and sandy beaches in close range. There’s a 3 hour walk along beautiful Spirits Bay that takes you to Pandora where you can stop to observe shore birds or camp for the night. 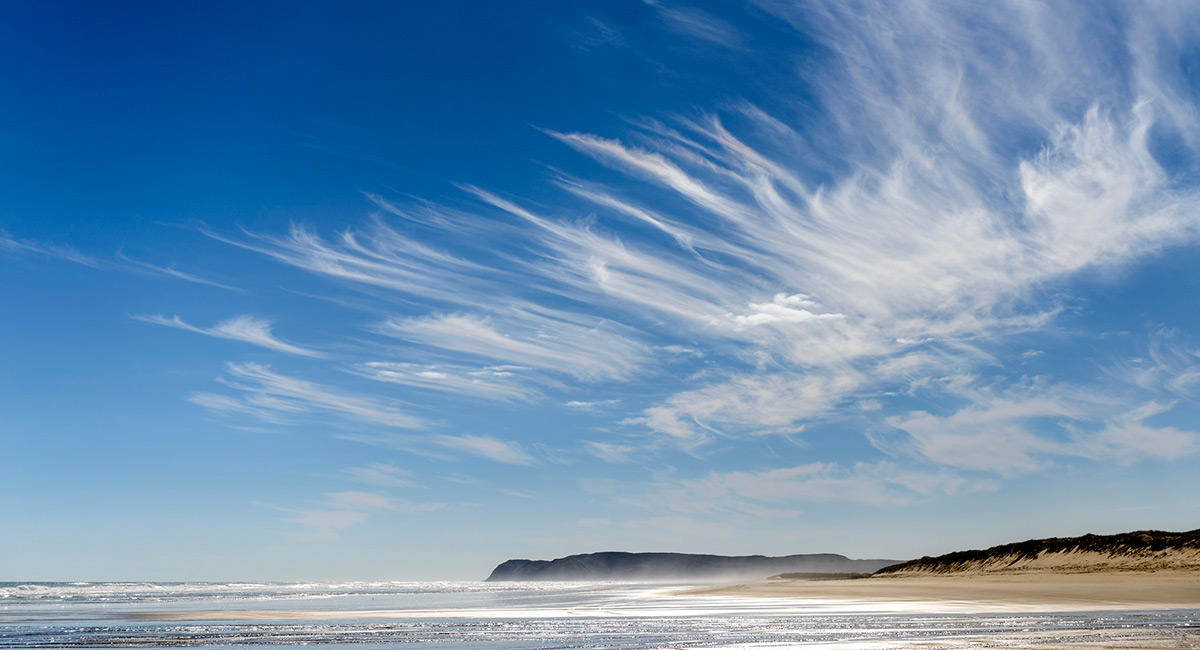 Ninety-Mile Beach is the fabled strip of sand that stretches from Ahipara to Scott Point, five kilometres south of Cape Maria van Diemen. Truth be told, it is actually 88 kilometres long. Beach activities range from surfcasting and swimming to bodyboarding down the sand dunes. A special treat is digging for tuatua (a native shellfish) in the sand at low tide. Flanking the beach is the Aupouri Forest, which provides a green escape from the hot sun. You can access the beach via Waipapakauri Ramp.

This beach is officially a highway, but is really only suitable for 4WD vehicles and is safe to drive only at specific times of the tides. Rental companies won’t allow their cars on the sand, mostly for safety reasons. The easy way to drive along the beach is to catch a coach tour from Kaitaia. 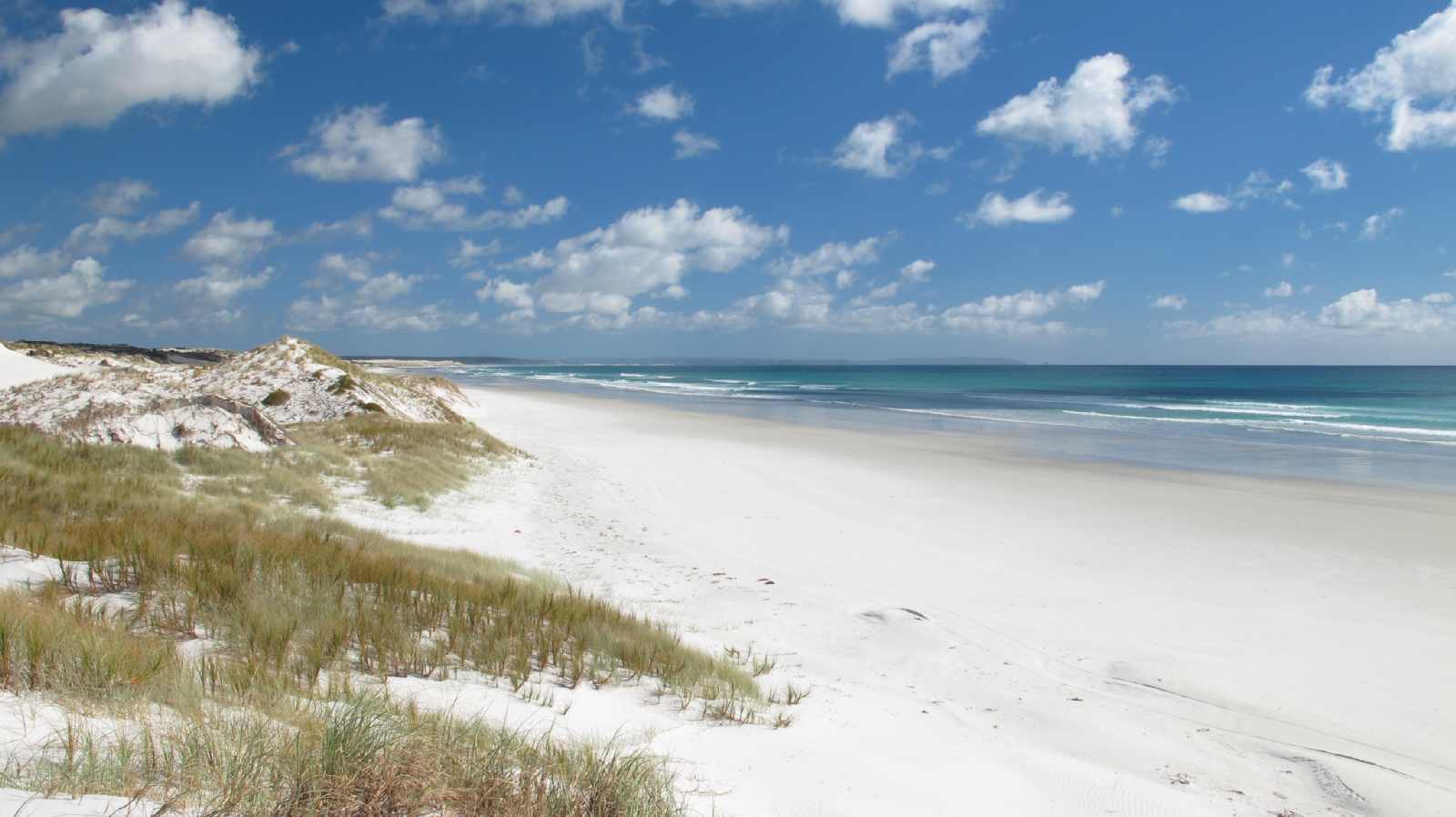 A stunning white sandy beach right on your doorstep. Rarawa is your own slice of Far North paradise, so come relax and enjoy. At high tide enjoy swimming in the lagoon, or go for a dip in the ocean. Other popular activities include, fishing, kayaking and all types of water activities. 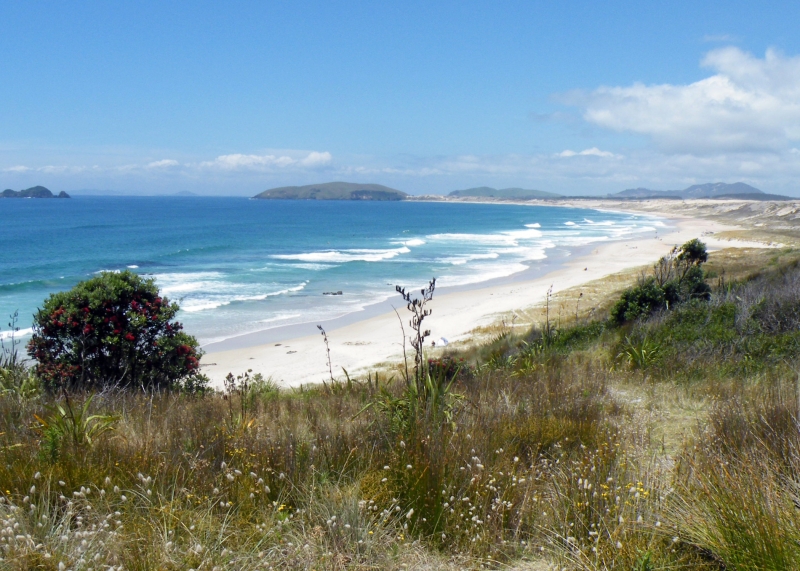 Henderson Bay caters to a wide range of interests. On calm days the crystal clear waters make it a perfect place for snorkelling and diving, with the lagoon and rock pools exposed at low tide making great places for children to swim and explore the marine life that is at the beach. Henderson Bay is also known for producing surf further down from the swimming areas. Even dolphins enjoy coming here and will sometimes play and surf as well. 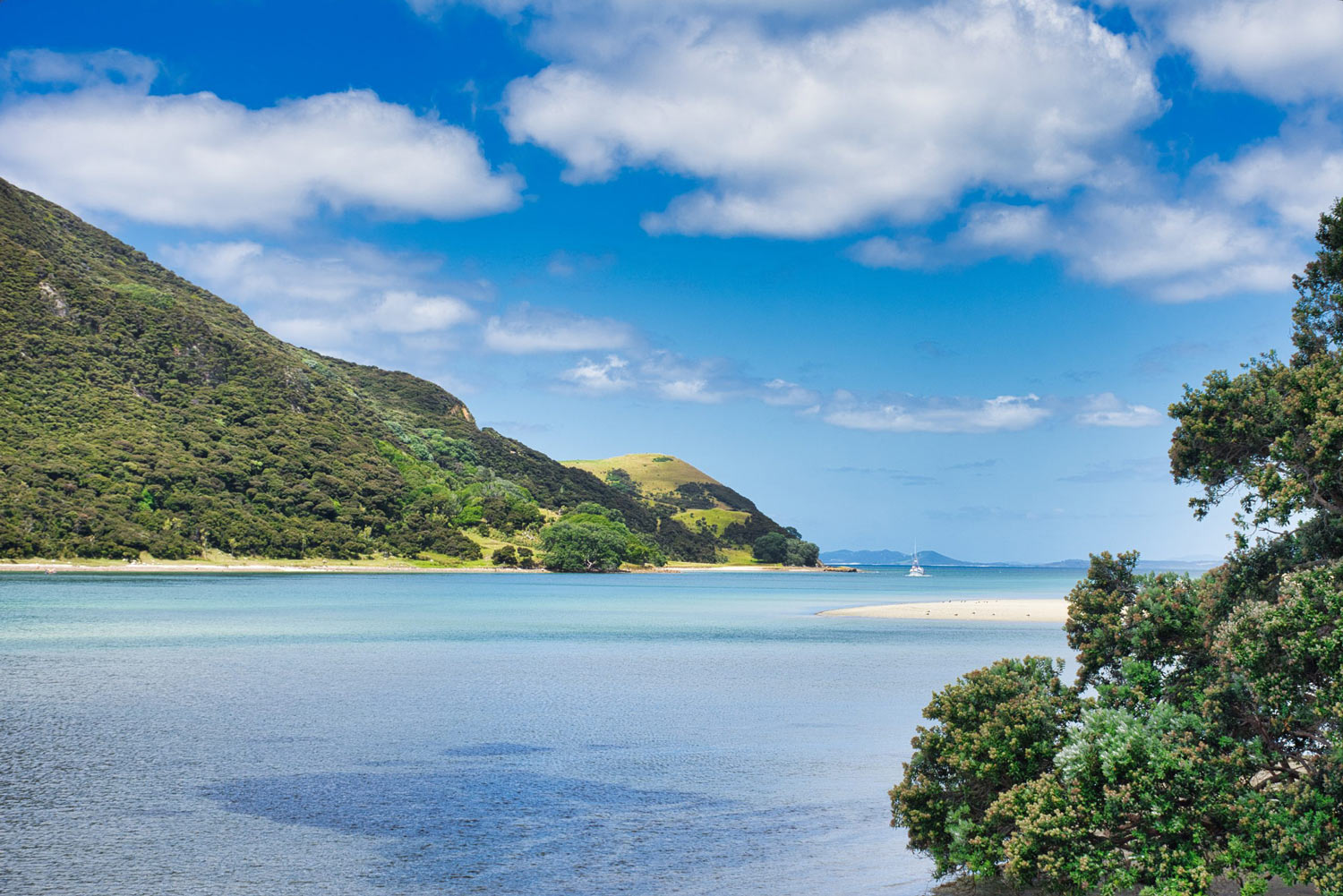 Houhora Heads is an easy-to-spot landmark, Mt. Camel (Mt. Houhora) was the first part of New Zealand that the early explorer Kupe saw, but he thought it was a whale, according to Māori legend. The harbour is long and narrow, mostly sheltered but with exposed sand banks at low tide. There is a deep channel along the southern shore as far as Pukenui Wharf. Mt Camel/Tohoraha (also called Mt Houhora) is a 236-metre hill forming the North Head. The South Head is a flat area. 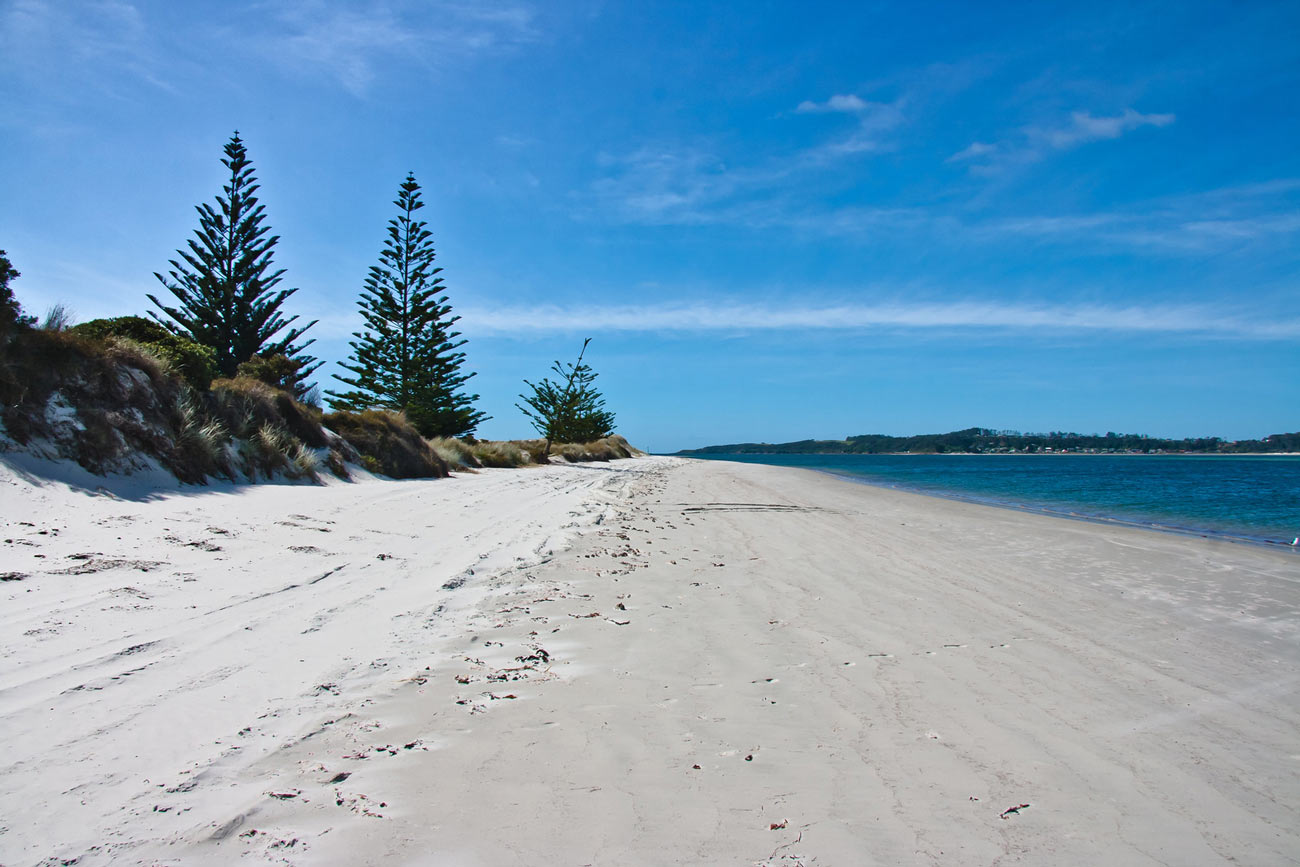 A stunning spot hidden away on the north side of Rangaunu Harbour. You get off the main road north of Waipapakauri and head over to the inner harbour.

East Beach has pure white sand, and is a great fishing spot, nice for a walk and of course swimming. 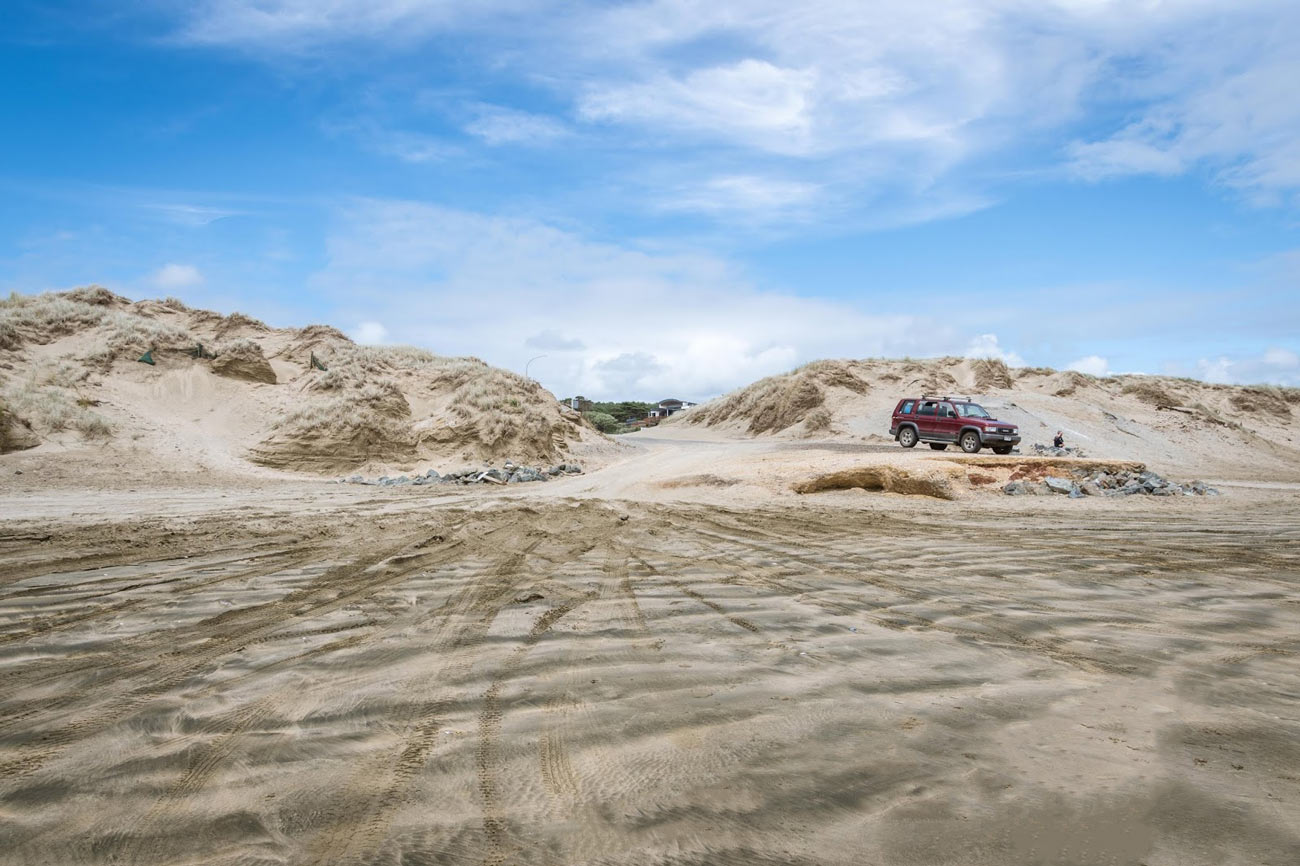 Waipapakauri beach access is often referred to as “The Ramp” by locals. Popular activities include swimming, surfcasting, surfing, boating, fishing, kite flying, hang gliding, shellfishing and of course walking along the Tasman Sea. This beach is located close to the center of “Ninety Mile Beach”. The world’s biggest snapper surf-casting contest takes place annually at the end of the swimming season, in early March, and is based here. 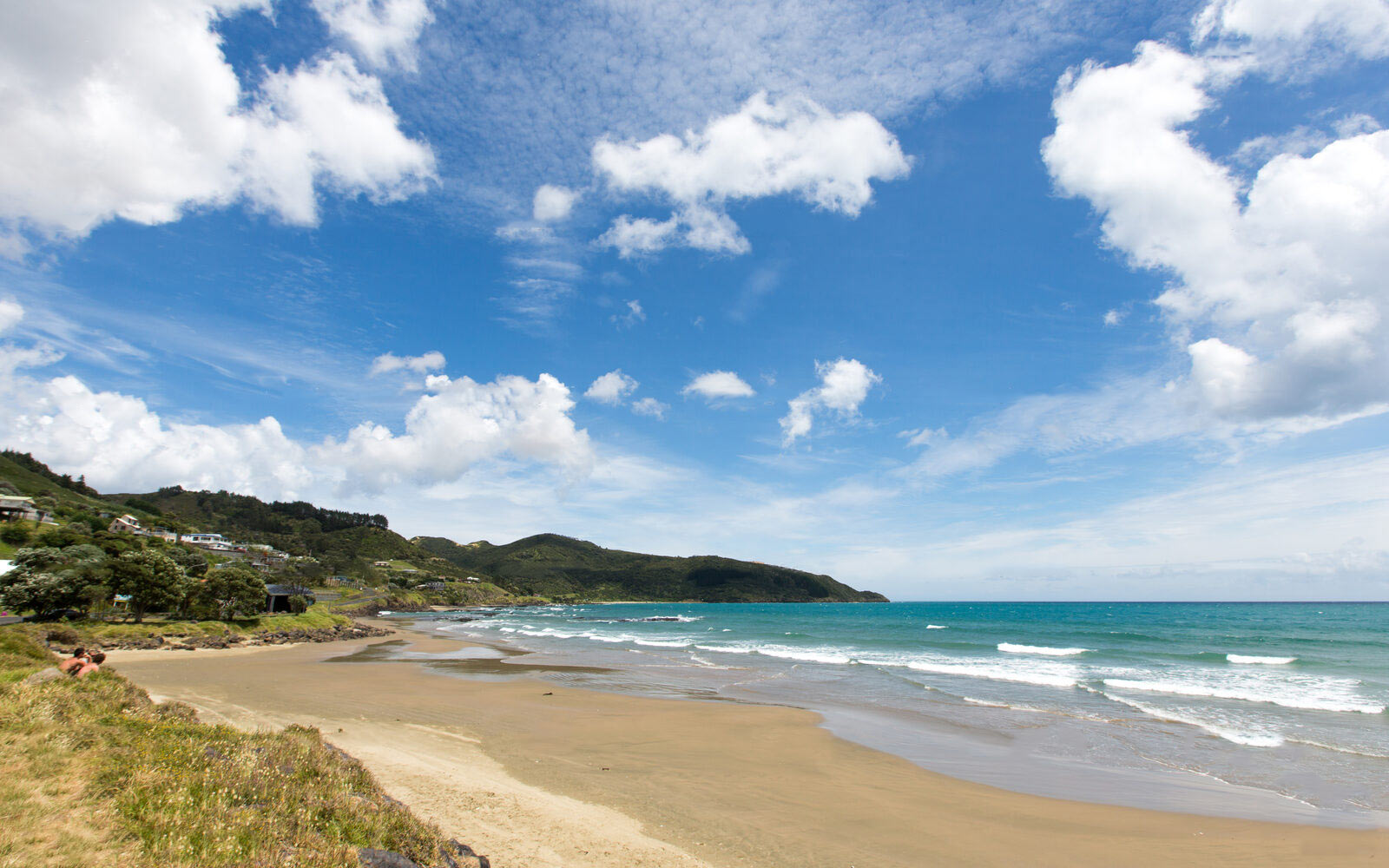 Ahipara Beach is a safe swimming location and it gets a great deal of use for this purpose during the warmer months. The beach slopes gently into the ocean and waves break evenly all along the beach. Just to the south of the beach there is a good fishing and surfing spot and this gets a great deal of use. All users need to be careful of the northward longshore drift that is present during times of surf. 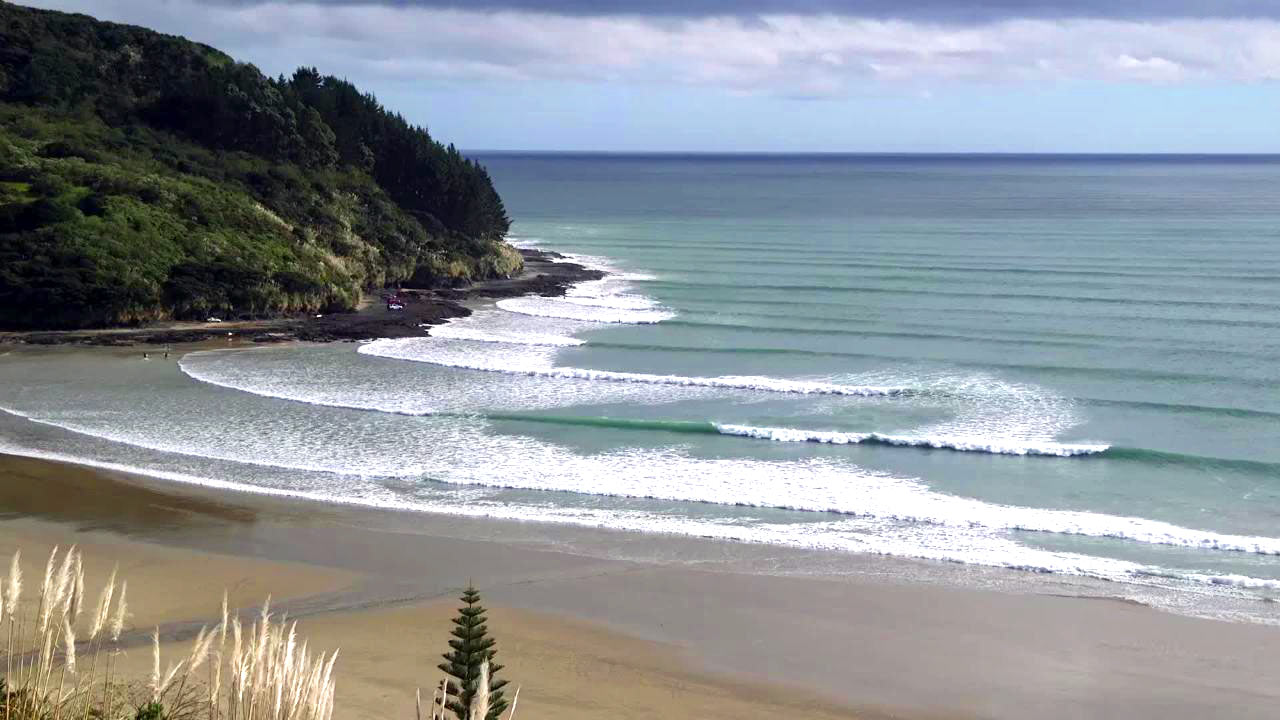 Shipwreck Bay is one of those spots known by NZ surfers, even if they’ve never ridden there before. Shipwreck Bay’s name is because of the shipwrecks still visible at low tide. 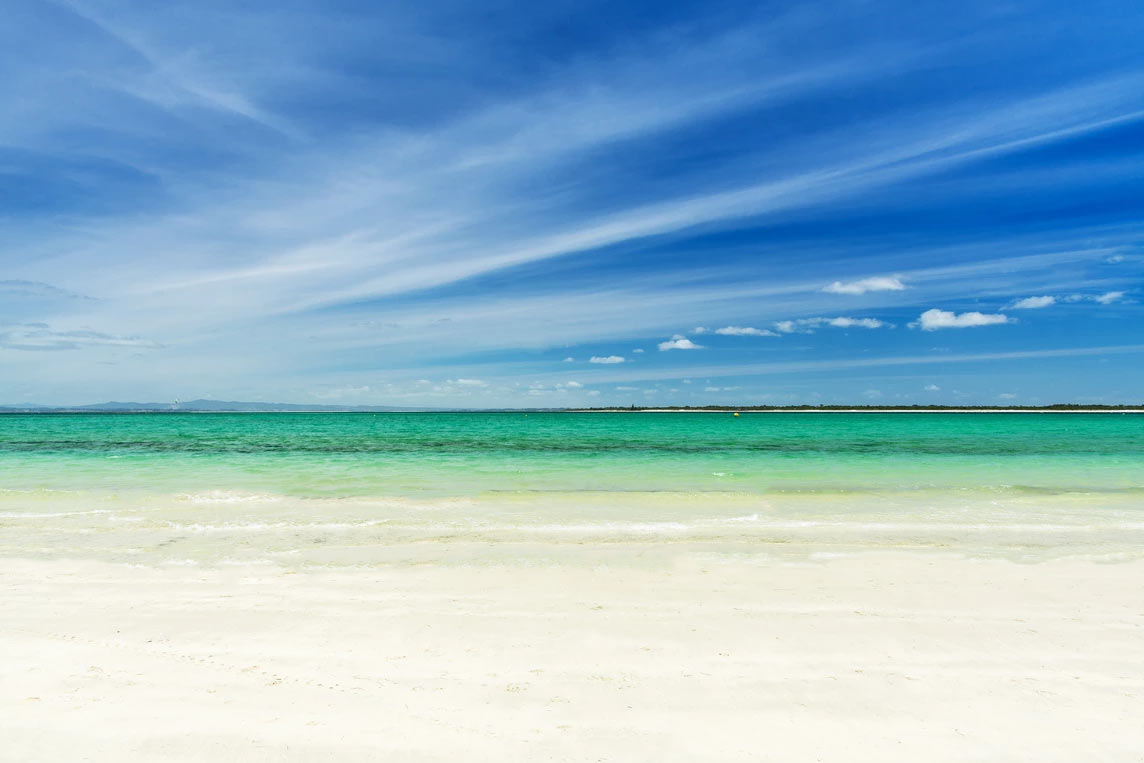 Perfect swimming beach, recommended surf casting spot and boat launching facilities there is something for everyone in the family. 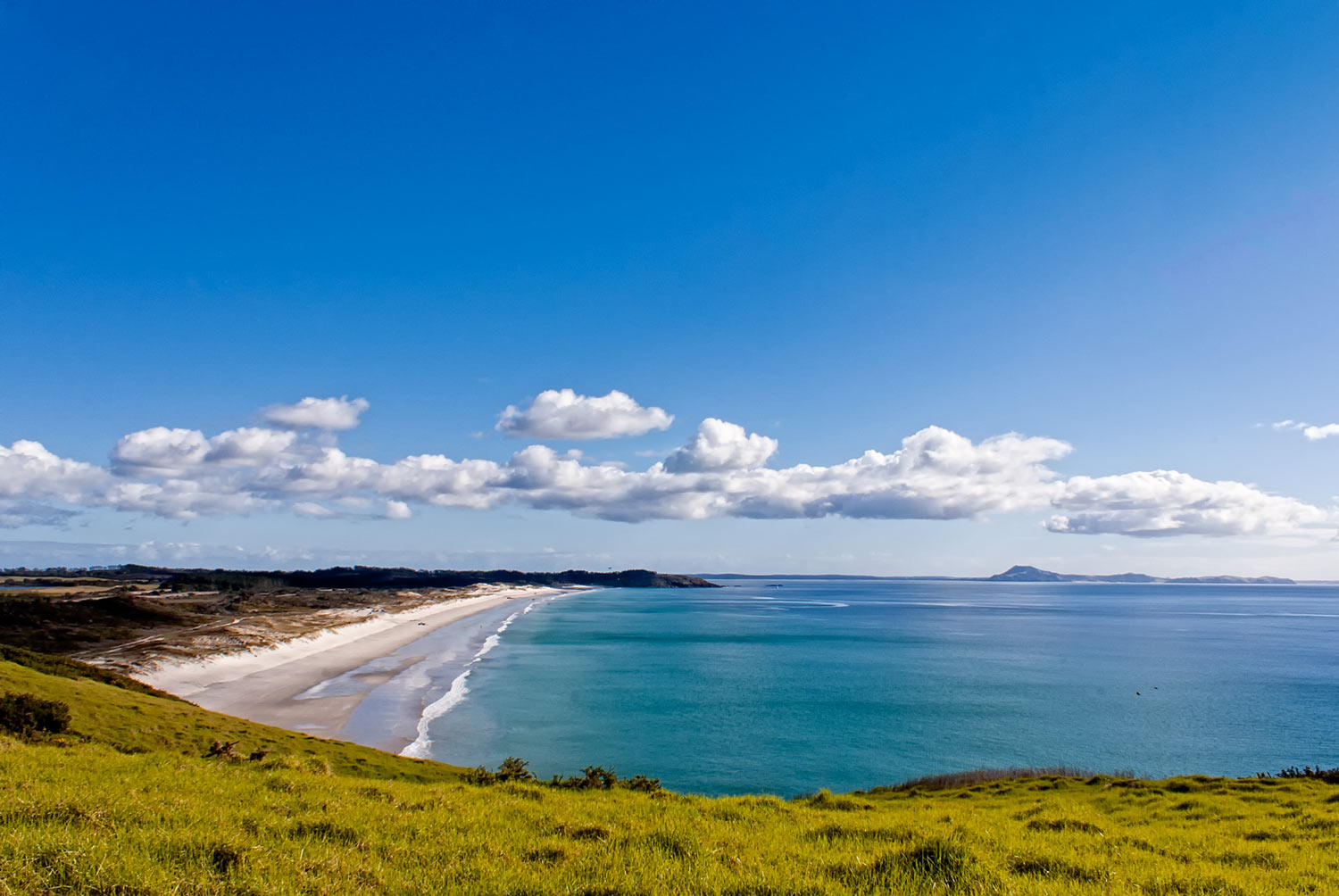 Puheke Beach is a glorious surf beach which invites you in for a swim or a paddle. If you walk along the stretch of beach, away from any other swimmers who have chanced upon it, there will nothing ahead of you but the great sweep of the coast, the white sand and the dunes. This idyllic beach offers you a truly blissful retreat. 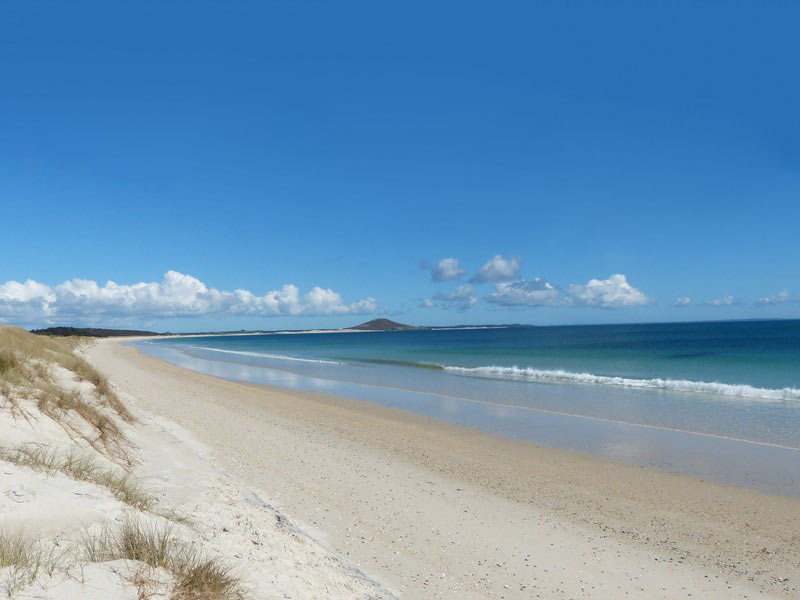 This beach is fantastic in the summertime for swimming, the sand is a stunning pure white silica sand which is typical of alot of beaches on the eastern side of the Far North. 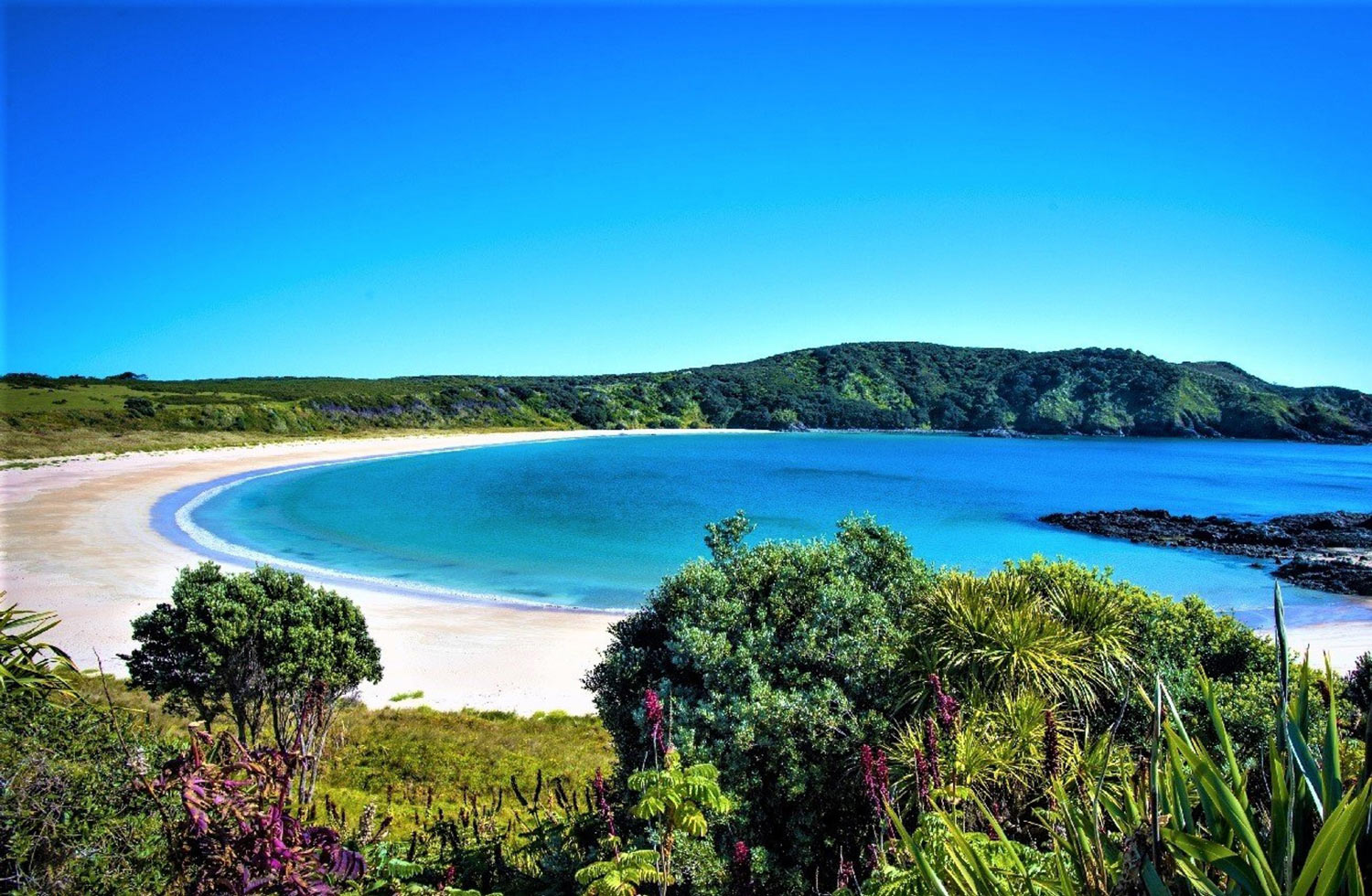 This is a ideallic beach, popular with families and boaties. Camp near by in a sheltered bay with campsites nestled amongst beautiful pohutukawa trees.

A day-use area and boat launching facilities are available. Enjoy diving, snorkelling and swimming at the beach, a short walk away from the campsite. 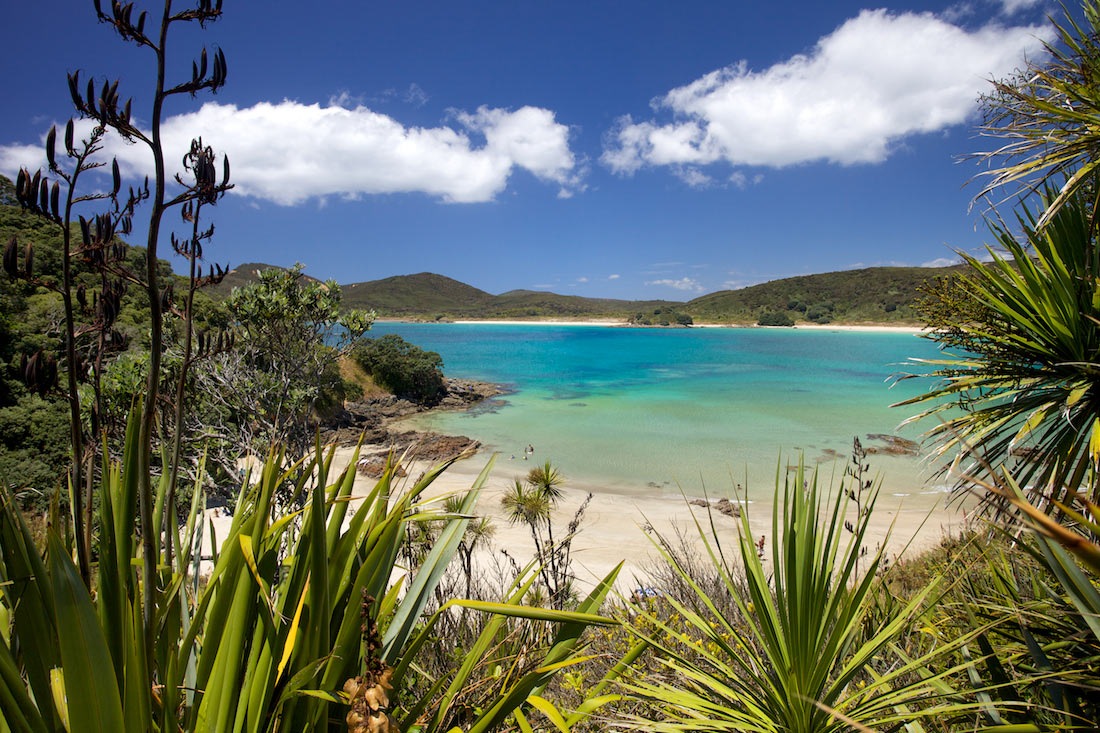 This is a top spot for relaxing, swimming, fishing, walking or whatever! As it is opposite Matai Bay, you can expect the same picturesque scenery and activities as Matai Bay. 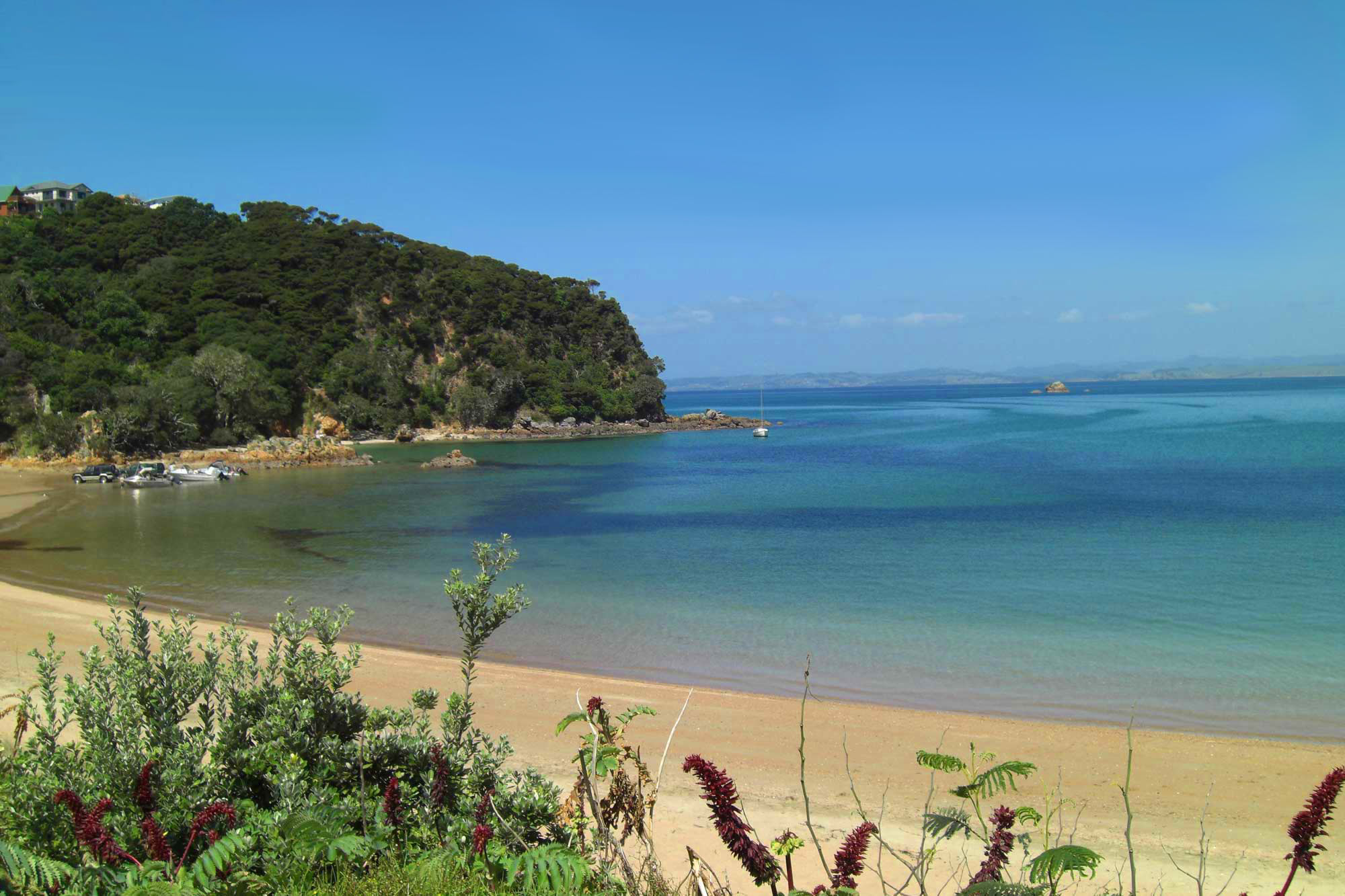 The waters surrounding Whatuwhiwhi k are a fishers paradise, offering some of New Zealand’s best game, deep sea and land-based fishing. Most of the world records for striped marlin of varying classes have been established off the tip of the Karikari Peninsula. Boats can be launched here (4WD recommended) and if you are feeling energetic, take a walk along this stretch of coastline and get yourself some Tuatua at low tide.

Whether you head out for a day on the boat or surf cast from the beach or rocks, you’re bound to bring home some fresh fish for dinner! 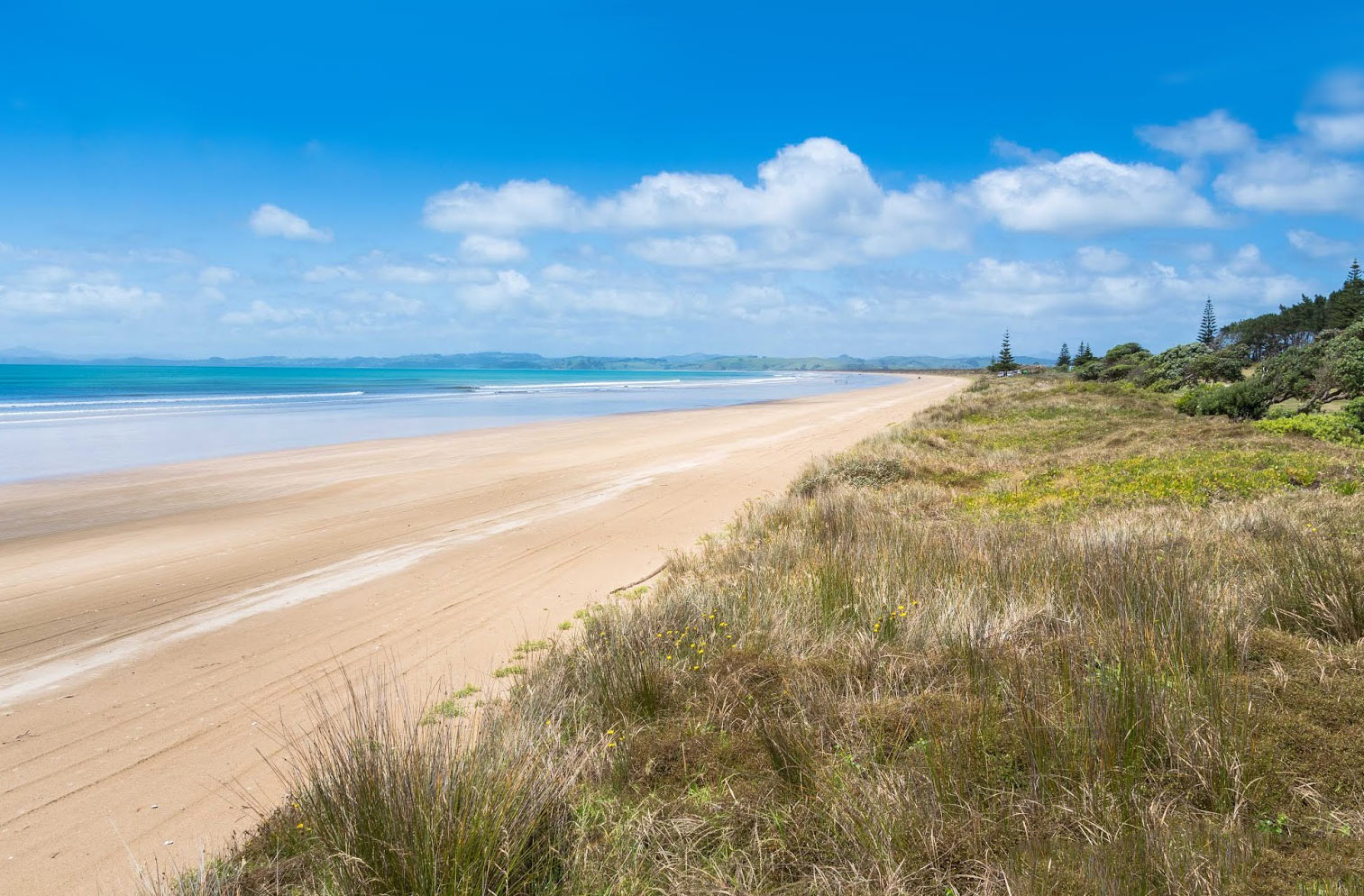 Tokerau Beach is the longest beach on the Karikari Peninsula, with sand stretching for 18km along Doutbless Bay. The beach is a popular location for swimming, snorkelling, diving, fishing, collecting tuatua, kayaking and boating. 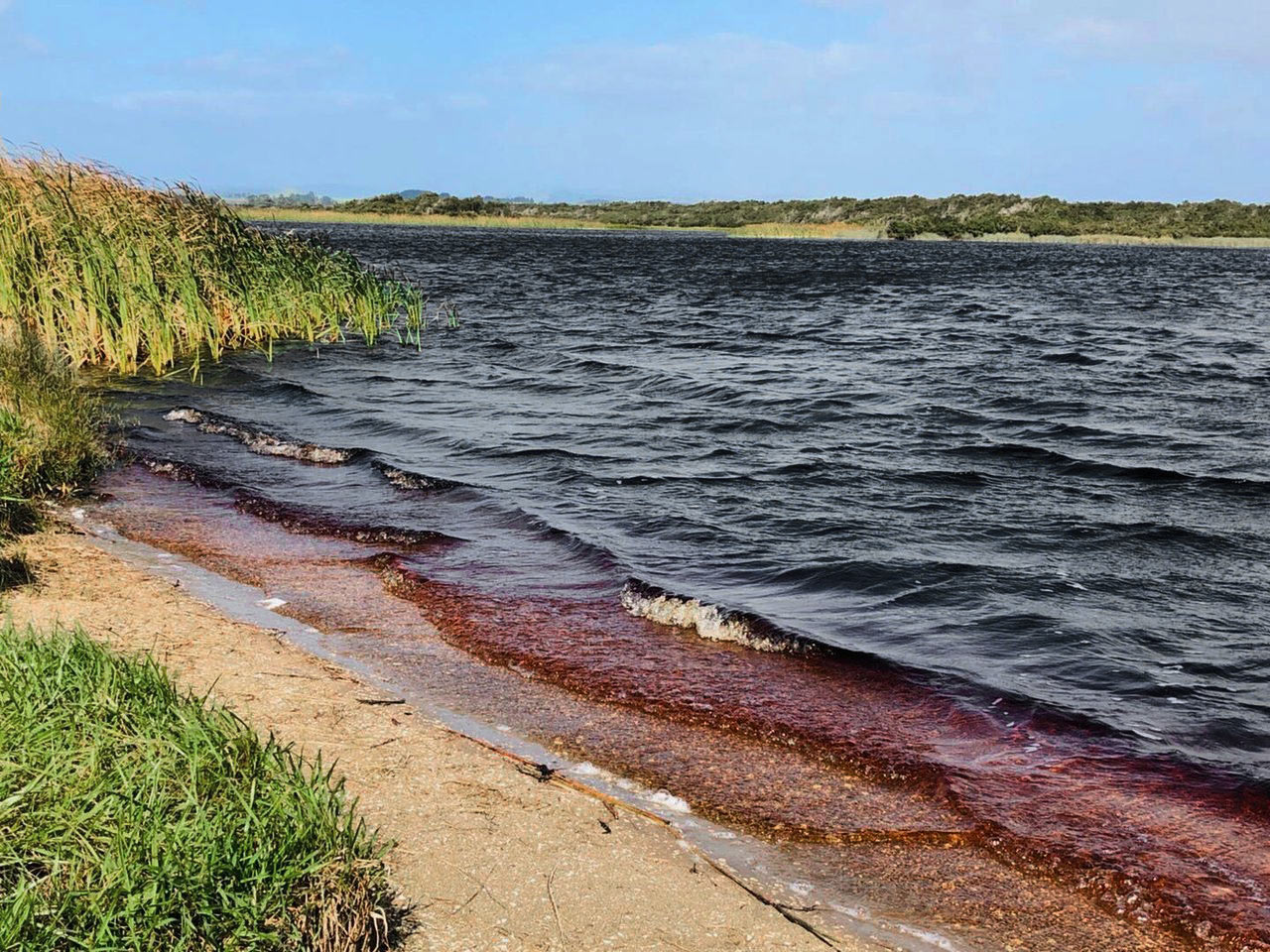 Have you ever fantasised about swimming in a bathtub of Coca Cola? Okay, that’s a bit strange, but on the Karikari Peninsula, you can swim in a whole lake that looks just like coke! The water is turned the red brown colours by the peat and natural tannins in the water, it doesn’t colour your skin, it’s perfectly safe.

Please check the current safety of the water and observe signage that may be erected for your safety.  There are times when the lake is not safe to swim in. 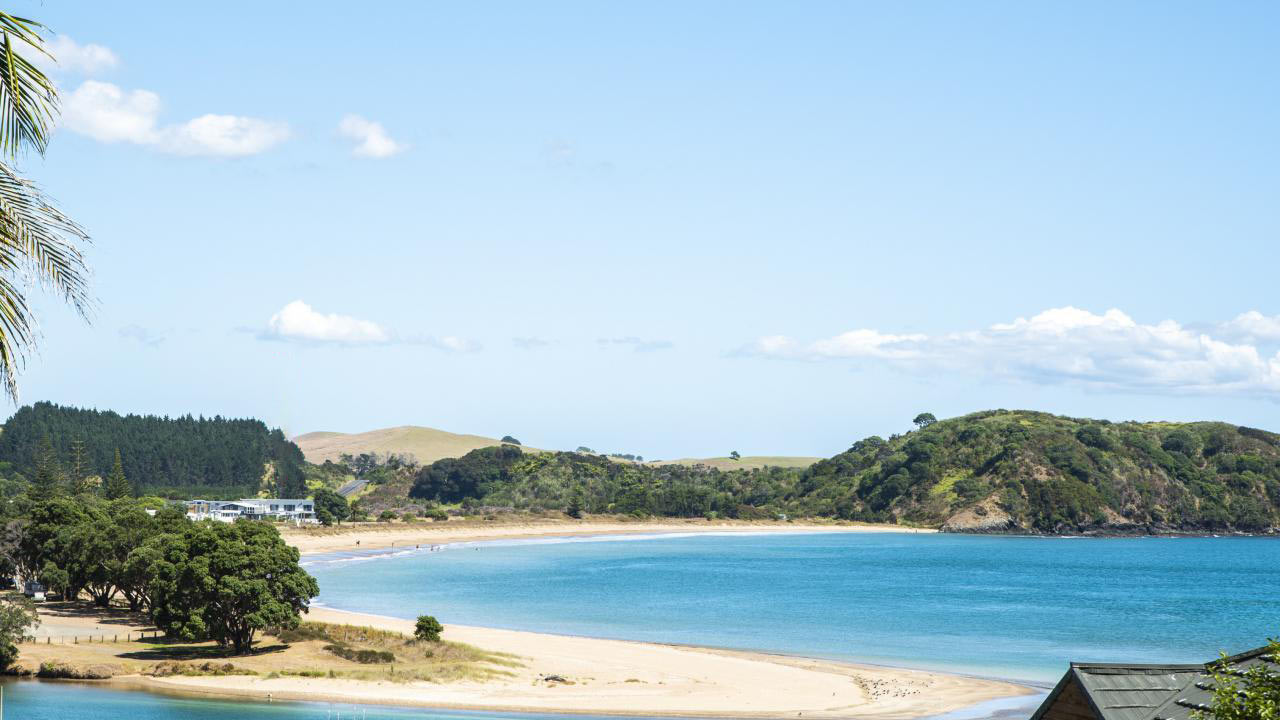 A beautiful reflection of one of New Zealand’s Far north beaches. Taipa Beach is white sand with a light shelly base, it is a safe swimming beach with majority of the time small waves, there is also sheltered swing in the Oruru River side. There is plenty of parking and the entire beach is useable. The local shops are 5 mins walk for refreshments, Boat launching, Toilets, cafe, wharf, boating club and seats are all accessible along the beach edge. 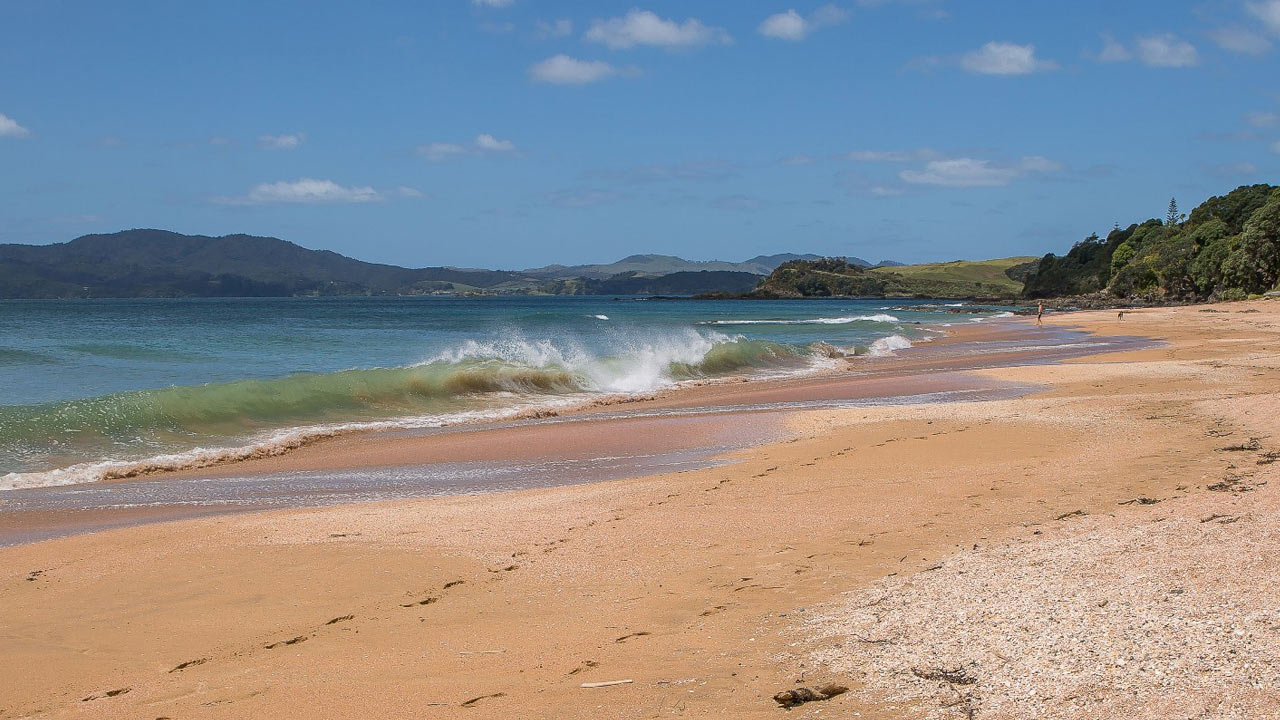 Cable Bay, directly off SH10. Cable bay offers you a mixture of Swimming in the ocean or when the tides in at the north end of the beach you’ll find a shelter inlet which is fantastic for the kids. The sand is a mixture of finely crushed shells which gives the sand a slightly pinkish look, the sand is soft to walk on though. It’s not an uncommon sight to see people fishing off the rocks, with great northland fishing results, there is also a variety of rock pools scared along the bay.

Great relaxing views, and fantastic ice cream shop, theres a rest stop with tables, and even a nice playground and grassy verge for the kids to run free. 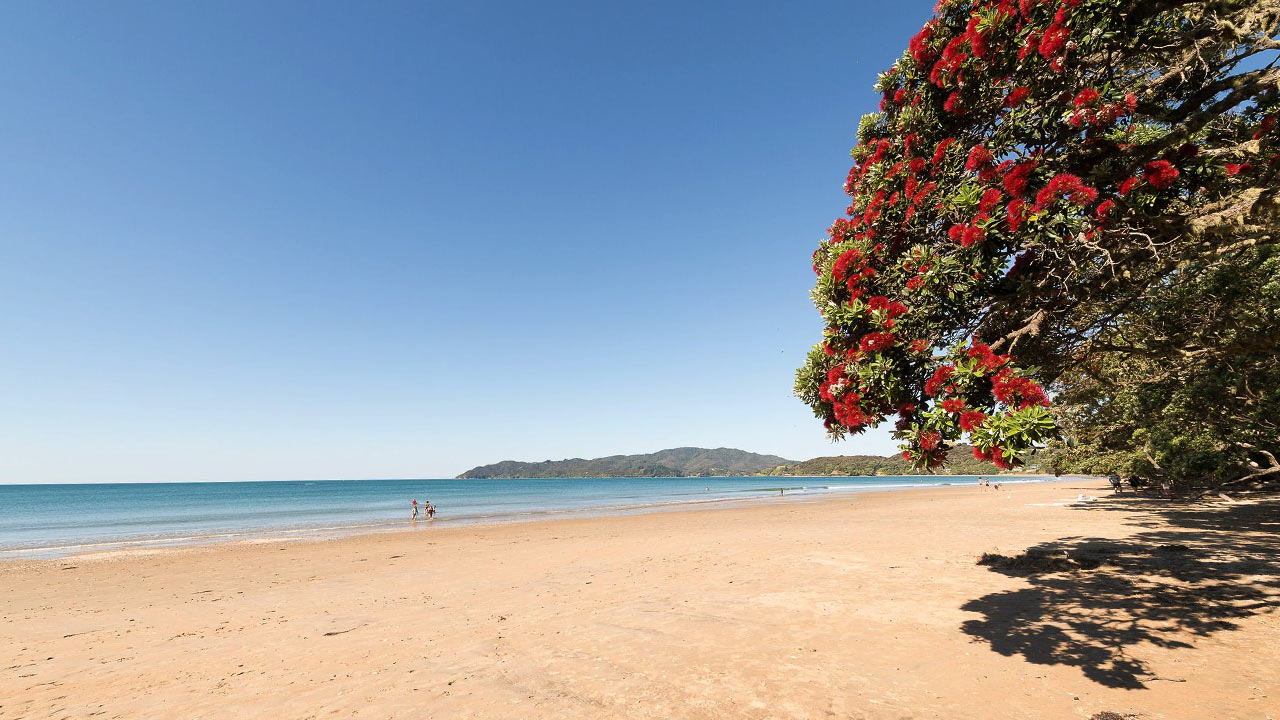 Coopers Beach offers over 2km of wide and level beach framed by Pohutukawa trees, making it one of the most eye-catching beaches in the Northland region. It is easy to find shade under one of the trees and have your own private spot. Gentle waves makes it good for kids and there are local shops and a Foursquare supermarket located in one of the parking areas. 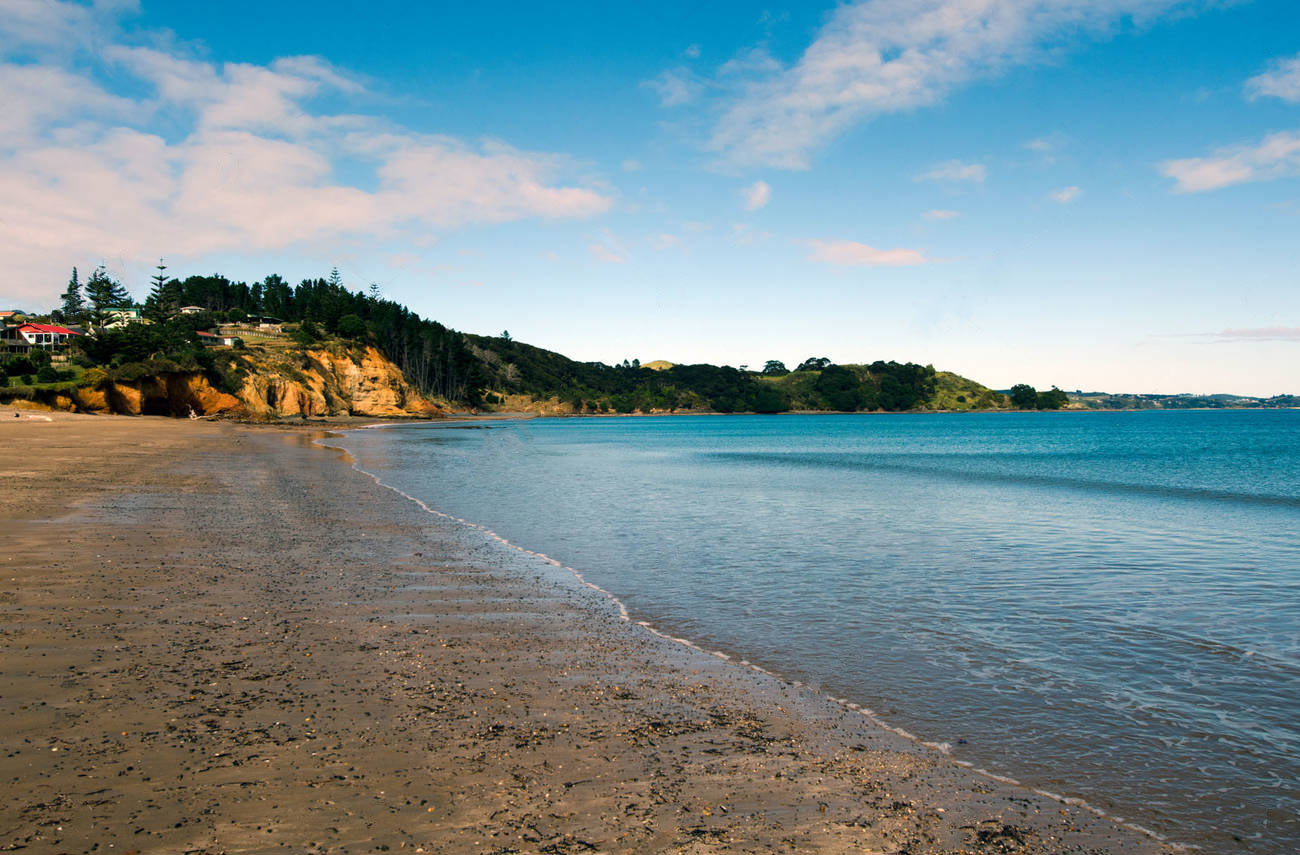 Hihi, named after the rare and beautiful stitchbird, is a small beach community. It has long been the land bridge first connecting the surrounding Māori pā with the many early settlements and food gathering areas to the north. Later it would join the whaling store on Butler Point and to the farming and logging areas up towards Taemaro Bay, which had its own shore based whaling station in the day. Now this idylic setting makes it perfect for baches, launching small fishing boats, and camping at the campsite.